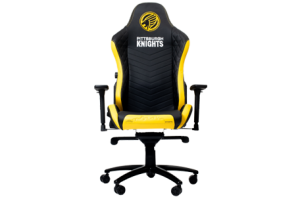 PITTSBURGH – PNC Bank is joining forces with the Pittsburgh Knights to launch a Women in Esports initiative. The locally headquartered organizations are partnering in support of gender equity, a topic they care deeply about and actively work to support. This sponsorship marks PNC’s first foray into esports.

The PNC x Knights Women in Esports initiative will be an effort to develop actionable and expert solutions for gender equity disparities in the emerging esports industry. The Knights, with PNC’s support, will facilitate open and honest conversations about how esports industry insiders and affiliates can work together, act as leaders, and take steps towards opening up the playing field to a more diverse group of athletes.

With the understanding that gender equity in gaming is a large and multi-faceted issue that cannot be solved by any one group, the Knights and PNC are putting together a steering committee to lead discussions and spark ideas about how to change the narrative for women in this field. The committee will be composed of professionals from the gaming community, esports industry, local sports industry experts, and scholars who have studied the history and trajectory of women in traditional sports and society. The conversations and ideas raised from this committee will be shared and used to help develop initiatives and tactics that various esports and gaming verticals could reference and implement.

“We have so much respect for PNC and strive to follow their lead in the way they support their communities,” says Knights President James O’Connor. “The issue of inclusivity in gaming is something we feel very strongly about and I’m happy that PNC wants to make a positive impact with us in the esports space.”

Even though women play video games at an almost equal rate to men, and make up approximately 40% of the global esports audience, they are underrepresented in professional leagues and face harassment during casual play.

“The Knights have not only brought the exciting new esports industry to Pittsburgh, but they care about setting the stage for greater inclusion and equal opportunities in the space,” says Lou Cestello, head of regional markets and regional president of Pittsburgh for PNC Bank. “We’re eager to connect with new audiences by supporting an organization like the Knights that shares our values—and competitive spirit.”

The Knights are Pittsburgh’s first professional esports team, which in 2018, partnered with the Pittsburgh Steelers. Since their launch, they have worked to bring Pittsburgh to the forefront of the global competitive video gaming industry while also working to support the local gaming community. PNC also has a longstanding commitment to supporting the communities it serves and prioritizes empowering women within its organization. The company offers a Women’s Leadership Development Program, Women Business Advocates training, and a Women Connect Employee Business Resource Group, which supports female employees with professional development. With both organizations working to champion inclusivity, this partnership is an especially good match.

Initially, PNC x Knights Women in Esports content will be shared as a LinkedIn series on the Knights social channels and other local and national channels this fall. Follow the Knights on Twitter @knightsgg for more information.

ABOUT PNC BANK
PNC Bank, National Association, is a member of The PNC Financial Services Group, Inc. (NYSE: PNC). PNC is one of the largest diversified financial services institutions in the United States, organized around its customers and communities for strong relationships and local delivery of retail and business banking including a full range of lending products; specialized services for corporations and government entities, including corporate banking, real estate finance and asset-based lending; wealth management and asset management. For information about PNC, visit www.pnc.com.

ABOUT THE PITTSBURGH KNIGHTS
The Pittsburgh Knights are a global esports organization headquartered in Pittsburgh. Since launching in 2017, the Knights have focused on entertaining fans, sharing esports, and bringing people together. They solidified their spot in the City of Champions by partnering with six-time Super Bowl winners the Pittsburgh Steelers in 2018. Since then, Pittsburgh-native and multi-platinum recording artist Wiz Khalifa has come on board as a strategic partner. Adding to their troop is Pittsburgh Penguins’ alternate captain Evgeni Malkin – 3-time Stanley Cup winner. To cap off their powerhouse group, they brought on Mexico City-based media fund MX LATAM in 2019. Officially recognized by Pittsburgh as a premier team, they have partnered with the most talented, innovative, and prestigious sports and entertainment industry leaders – both in the city and around the world. Their team includes some of the top Rocket LeagueⓇ, Super Smash Bros. Melee™, PLAYERUNKNOWN’S BATTLEGROUND©, SMITE©, Apex Legends™, TrackmaniaⓇ, Gears 5™, and Madden NFL© players in the world. Please go to https://www.knights.gg for more information and the latest news on the Knights.

Women in Esports: Diversity is the Key to Achieving Sustainability and Success

Welcome to the Women in Esports podcast series that champions women in the esports industry who...
Read More

Women in Esports: The Modern-Day Plight of the “Gamer Girl”

To understand how to solve the challenges facing women in esports as well as the gaming community...
Read More

Women in Esports: Stacking the Industry Odds in Our Favor